Changing over to a fortnightly blog post didn't quite go to plan as this is a few days late. Sometimes I wonder how I did everything when I was working five days a week. Yesterday was a total spring clean of the house so I can at least feel good about that. I've also been working on some of the brick walls for my U3A class - happy to say that I have broken one wall down and will be presenting the results at the class on Wednesday. 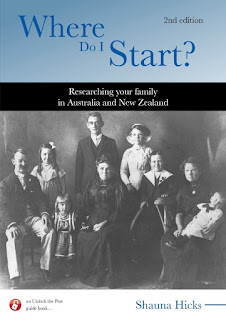 The second edition of my Where Do I Start:Researching in Australia and New Zealand is now available and I brought home some copies with me from the Unlock the Past seminar in Perth the other week.

The Western Australian Genealogical Society also gave me a copy of Family Reflections which is their silver anniversary anthology edited by Loreley Morling. I love reading family history stories and this is a collection of 35 family histories submitted by individual members. So many aspects of Western Australia's history is reflected in the collection and I will certainly enjoy reading the publication and getting some tips for my own WA families.

Resources
As always there are new resources online but the State Archives and Records NSW new online index has over 2500 names in the Crew & Passengers lists, 1828-1841 that were located in correspondence sent to the NSW Colonial Secretary's Office. So if you are missing a crew member in early NSW, check it out.

Seminars
The Unlock the Past seminar in Perth was over two days with Doug Elms, Kerry Farmer and myself giving talks on a variety of subjects including family history software, DNA, newspapers, immigration, mining ancestors, education records and more. My report on the geneaevent gives all the detail. I gave four talks and all four presentations are on the Resources page of my website, scroll down to Presentations.

What's Coming Up?
My next talk is on 11 July from 10-11 am at the Pine Rivers Heritage Museum and I will be having a fishy look at Bribie Island - talking about our ancestral ties to the Pumicestone Passage. The event is free and for catering purposes they do like you to book. I can certainly recommend the yummy morning tea. Last time I went there was a chocolate cake to die for. Book here.

Then two weeks later my son will marry his long time girlfriend. So that will be a family event not to be missed! They are doing things quite differently - there will be the main event on the Monday and the wedding breakfast will be a real breakfast on the Tuesday morning. He tells me his life is modelled on mine and I have to admit that I'm not the most conventional person. All I want for them is to be happy together and to make the most of their lives. So far they have achieved way more than I had by my 30s so their goal of living and working in Europe looks like a winner. All I'm thinking about is the opportunity of having a white Christmas in the next year or two! Something definitely on my bucket list.

Where did May disappear to? This blog looks like becoming a fortnightly event as the weeks seem to go too quickly these days. 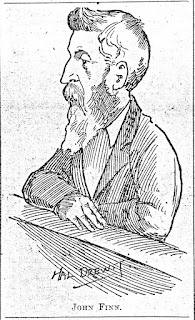 Since taking on the advanced family history tutoring at U3A, the preparation for each week's class seems to have taken over my blogging time. I enjoy the classes and have been making new discoveries on my own families while preparing the talks. Last week they wanted a session on insolvencies and bankruptcies and during the preparation I discovered that my great great grandfather John Finn filed for insolvency in northern NSW in 1897. I'm now waiting for a copy of the file from State Archives and Records NSW. The Archives doesn't have a copy service for this record series so I'm using NSW Family History Transcriptions who provide copies of key record groups. Certainly cheaper than travelling to Kingswood.

John is one of my favourite ancestors as he has left so many records - BDMs, passenger list, land files, court records, prisons, newspapers, asylums and now insolvencies. Yet there is no known photograph of him, just this newspaper sketch from when he was accused of arson. Thankfully he was acquitted but the records were still created.

Everyone's keen to continue so we have just signed up for another term. At the end of this term I will have done four terms, a whole year and some students have been with me the whole time.

The afternoon seminar with the Gold Coast Family History Society went really well with some good feedback. My two talks on Archives You Should Know and Skeletons in the Family had every body talking over the afternoon tea and post seminar. There were lots of questions too. As usual, both talks are on the Resources page of my website, scroll down to Presentations.

The Society has a wonderful venue to host these mini seminars with lots of room. Behind the seating area there is kitchen space for morning or afternoon teas.  Afterwards I was fortunate enough to be given a tour of their library, also in the same building.

Then four of us went out for pizza, wine and more stimulating talk about family history. I stayed overnight as it was over a two hour drive down, and after three hours of talking I didn't really feel like driving home in the dark. That's the trouble with winter, I miss the longer days.

Due to a heavy cold I ended up not going to Maurice Gleeson talks in Brisbane which was disappointing. I spent most of the day in bed asleep which is most unusual for me. He provided copies of both his talks to attendees so at least I had those to go through. Everyone said I missed a really good day. I do have the chance to hear him again in Seattle and on the Alaska cruise so that is something to look forward to.

Next Thursday I'm off to Perth for the Unlock the Past exploring family and local history seminar where I will be giving four talks. Kerry Farmer and Doug Elms are also on the program along with local speakers and exhibitors so it will be a full on two days.

Then it's a whole month until my next talk for Pine Rivers Heritage Museum where I will be having A Fishy Look at Bribie Island. Should be fun as its combining my family history with local history. I have been to talks there before and they always have a really nice morning tea.

Until next time, have a great genealogy time with lots of new discoveries.

Posted by Shauna Hicks at 00:41 No comments: 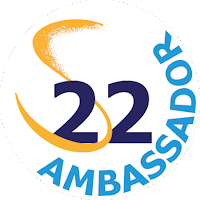 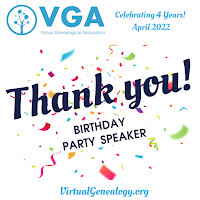 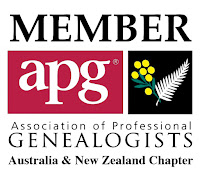