It's not quite a week since the last Diary but I thought there should be at least one Diary post during AFFHO Congress 2015. I'm still adjusting to the new time zone and waking up late as my body is programmed to wake at the same time each day. But I'm putting it to bed later than usual so I could be a bit of a zombie today.

It was a long trip here but we arrived safe to be greeted by a Congress welcoming committee who were our friends when we lived here many years ago. Then we were taken to the Mantra on Northbourne where we are staying and although we were early (before 2 pm), they found us a room that was ready and we were unpacked and having a reviving cup of tea within minutes.

I needed it because then it was the shortish walk to the Canberra National Convention Centre to collect my conference satchel (to be described in a later blog post) and meet up with lots of old geneafriends and a few of my new social media friends also came up and introduced themselves. I am going to have to stop thinking of people in terms of their blog names and remember their real names!

After I collected my blogging beads from Jill there seemed to be a whirlwind of photos with various people. No doubt some of those will surface on blog posts or social media. Then it was the walk back to the Mantra to get ready for the meet and greet at the Australian War Memorial. Fortunately I met long time friend Sue (now a member of the Caloundra Family History Group) and she offered to drive Max and myself there as he is still having a bit of trouble walking following his recent broken leg drama.

At the meet and greet we met up with lots of other people from our Canberra days but also from our genealogy cruises with Unlock the Past Cruises, other genealogy conferences and our days of living in Melbourne and Brisbane. Once you have been to one geneaconference, you know that there will always be someone to talk to at the next one as it is so easy to meet new people and to meet again regular attendees. 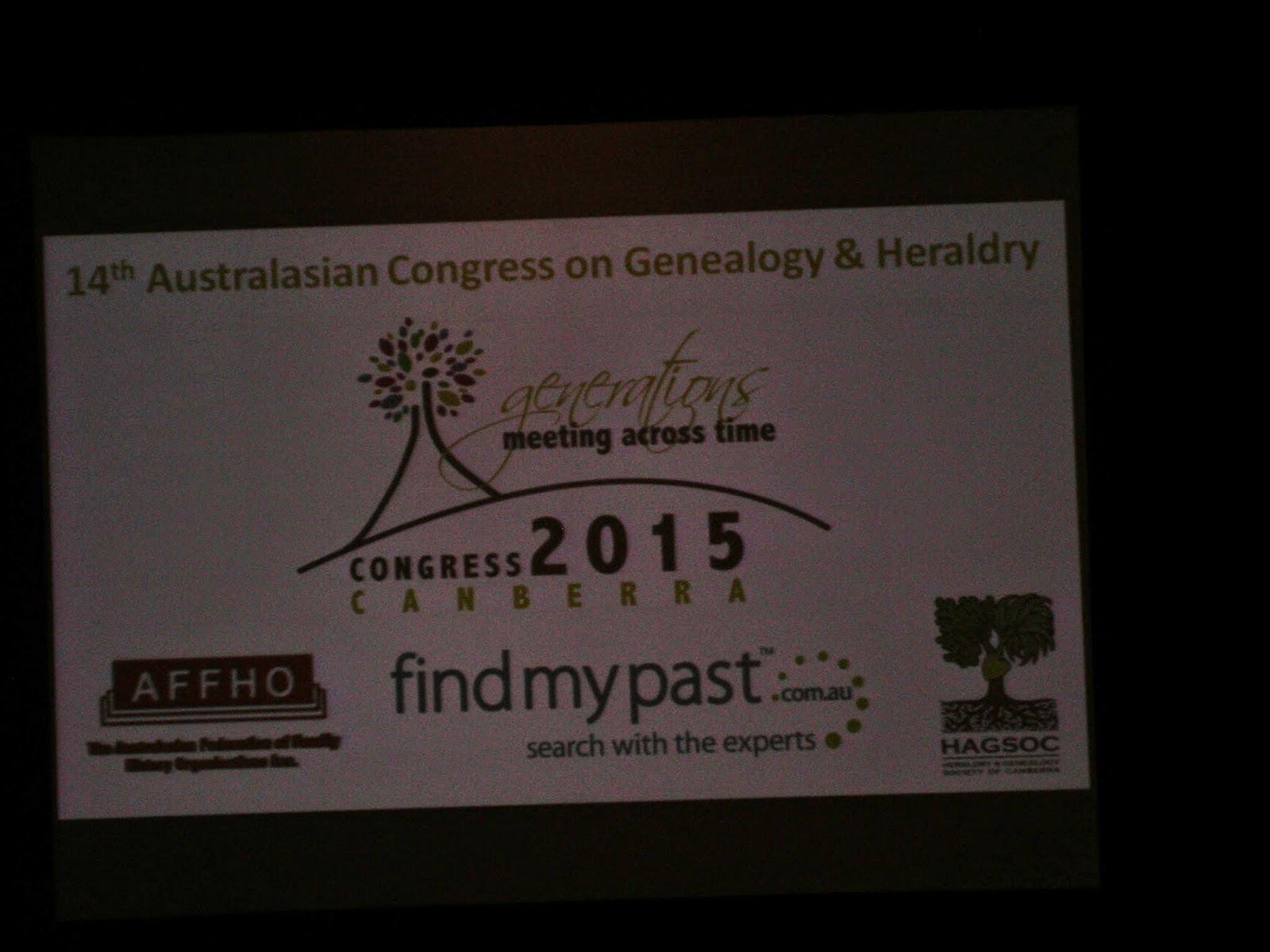 The first day of Congress talks was excellent and that will be a separate post too when I have more time. The venue is excellent and the Royal Theatre has three screens so that everyone can see everything. This is lots of room in the exhibition area and so far I have not bought anything. Early days yet. This was another opportunity to catch up with old friends while enjoying the excellent catering. There seemed to be lots of food at multiple stations so no overly long delays in getting lunch and tea and coffee. 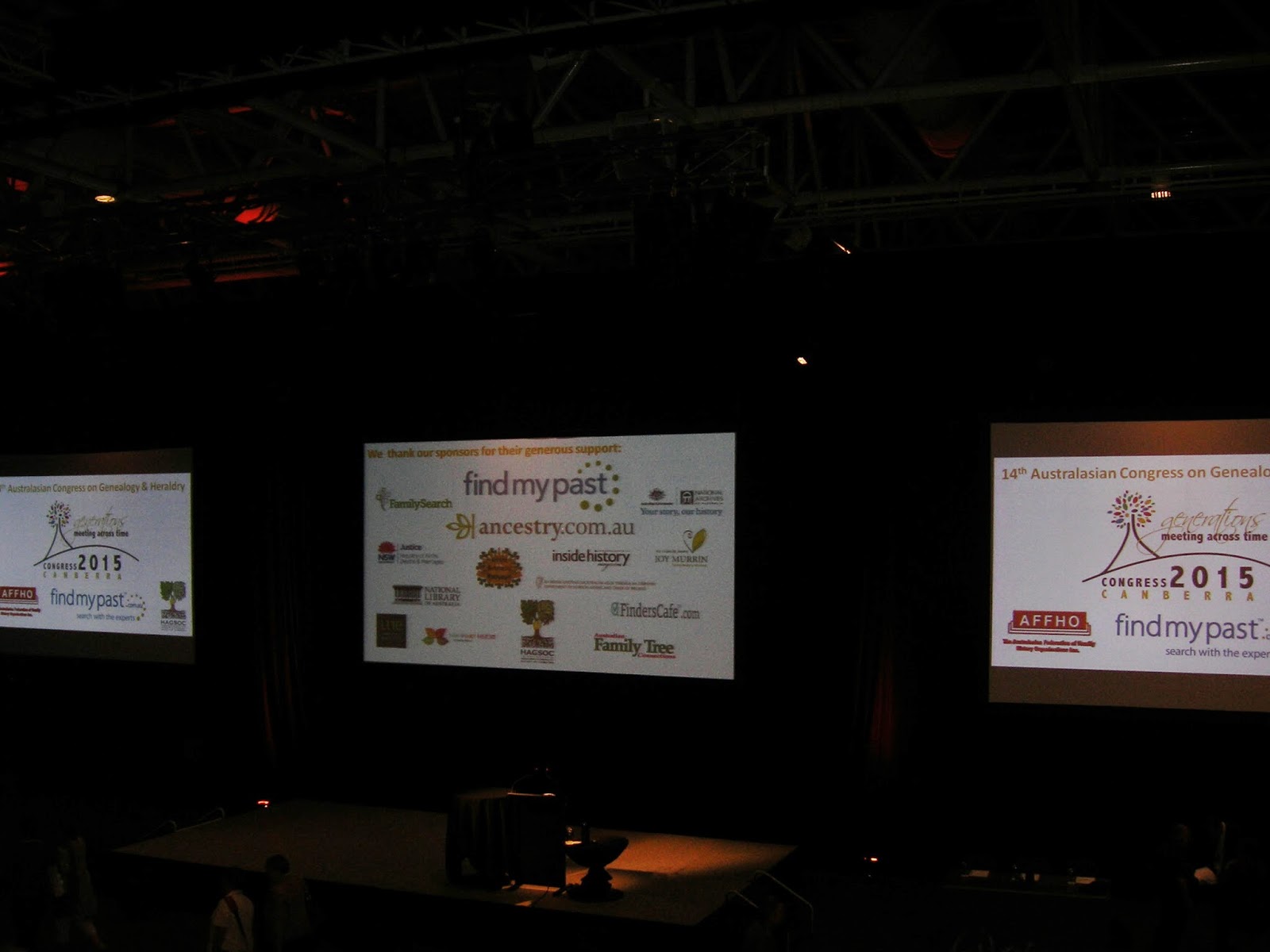 At the end of the day I attended the AFFHO AGM where I was given the opportunity to talk about National Family History Month 2015 and to encourage all AFFHO societies to participate. There will be more about NFHM once I have all my Congress posts written. It is the next big thing on the Australasian genealogy horizon.

The day ended with a great Chinese dinner at Kingston (the China Plate) with Dorothy from Wagga Wagga & District Family History Society and Rosemary from HAGSOC (Canberra), both long time geneafriends. It was a wide ranging geneadiscussion.

Well if I don't stop writing this update and get ready I will miss Josh Taylor from Findmypast and the first keynote speaker of the day. My talk on sporting ancestors is one of the last talks of the day so another long day and we have the conference dinner tonight at Parliament House! If you aren't at Congress, have fun watching us on social media with #affho #genealogy or follow the usual suspects. Until next time, happy searching.