A super busy week which is why this is a little late. Mum has not been well again and there have been lots of trips up and down the highway so little chance to blog or do research. But it is amazing what you can squeeze into those spare moments.

Some months ago I discovered two divorce files for my great uncle Denis Patrick Finn, a German prisoner of war in World War One. Read his story here. There was no chance of my getting down to State Records NSW in the near future so I used the services of Marilyn Rowan who was quick and efficient. I was aware that she did NSW transcriptions but not that she also offered a document service. It was a simple matter to place my order for the two divorce files (flat fee) and within a week I had digital copies of both files (one 32 pages and the other 44 pages). Dropbox is used to deliver the files due to their size. Sadly no photographs or certificates but I did learn some new info which made me feel even sorrier for Denis. 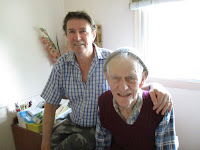 On the way back from one of our Brisbane visits, we called in to see one of Max's first cousins, Neville Spencer - a descendant from the second marriage of his grandfather, Max is descended from the third marriage. We had never met before and the Spencer likeness was well and truly evident. We took some photos and they kindly lent me some documents to copy. I will be dropping in again next Tuesday to return their documents and to give them some of our family information. It really does pay to track down long lost cousins.

Trove Tuesday blogging is starting to get me hooked! I had a great time trying to tie up some loose ends with another one of my Carnegie families. I knew a little from family stories but not any real detail. So after a few keyword searches on names, I was able to determine the date of death of his first wife and his marriage to his second wife. Both the funeral notice and the marriage notice mentioned his WW2 service but I have never been able to find his army dossier. So this led to another search for it and the discovery of an indexing error. Read all about how I found John James Carnegie's army dossier here.

I firmly believe that one of the main reasons we can't find some people is simply because of indexing errors. This is another great example of it and of course, the trick is discovering what it has been indexed under. I love people with middle names!

In some of my spare moments I have also been trying to keep up with Pauleen Cass and her A2Z blogging challenge in April. I know others have been doing it too but Pauleen always has catchy titles  (S for Stories and Serendipity and who doesn't love serendipity) and I find myself clicking links to find out more. See Pauleen's posts here. 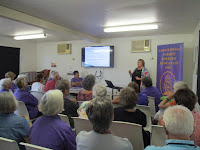 Thursday afternoon I gave a talk to the monthly meeting of Caloundra Family History Research - my talk Love Sex and Damn Lies went down real well. It is always surprising when people come up afterwards and say they have similar stories. I guess we all have very human ancestors. As usual my talk is on the Resources page of my website, scroll down to Presentations.

Tomorrow I am going to the Bribie Island Seaside Museum to hear Niles Elvery talk about and display WW1 items from the State Library of Queensland's collection. Niles and I used to work together in the John Oxley Library back in the early 90s so a good chance to catch up too.

My ANZAC Day tribute this year will be to the State Library's QANZAC100 project so stay tuned for that. It is a fantastic tribute to Queenslanders who went to WW1. It is how I found my army photo of Denis Patrick Finn but unfortunately his two brothers Robert and John were not captured in this digitisation project. I must investigate further because I would love good quality images of them all.

I still have to do Week 6 of the University of Strathclyde FutureLearn online genealogy course. It is the last week so hopefully I will catch up and finish by the end of the weekend. It has been a good course and considering it was free, excellent value.

This coming week should be a little less hectic and only one planned trip to the hospital with Mum on Tuesday . As the end of the month nears I know that my deadline for my blog and magazine article for The In-Depth Genealogist is due. That will probably focus my writing time along with the ANZAC Day blog. Have a great genealogy week!